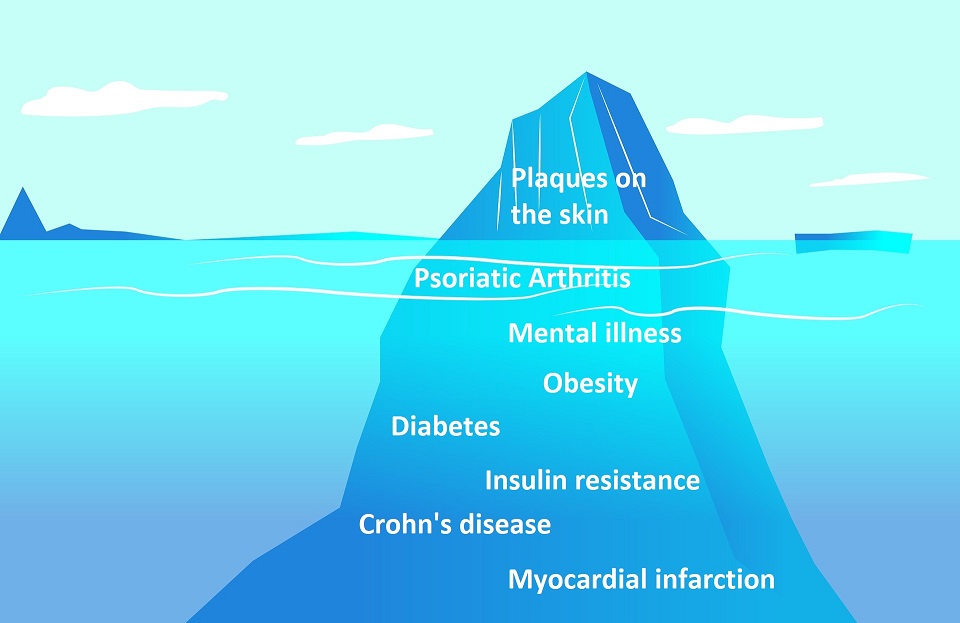 As if psoriasis as a highly visible skin disease was not enough. Often, additional diseases – so-called comorbidities – are added to this. From the mere effects on the skin (plaques) to the psychological stress and strain on the cardiovascular system, psoriasis can cause many things. Here you can find out which additional diseases occur particularly frequently and what you should keep in mind.

Does psoriasis often bring other diseases with it?

Psoriasis is a genetically determined, chronic inflammatory disease (read more about the basics here–LINK). Depending on the form and severity of the skin disease, it manifests itself externally as red spots with silvery scales. In principle, the entire body can be affected. However, psoriasis often brings with it a whole range of other diseases.

Prof. Dr. Matthias Augustin from the University Medical Center Hamburg and one of Germany’s leading experts in psoriasis puts it in concrete terms: “In 70 percent of psoriasis patients there is at least one comorbidity”. According to Augustin, the rate of undetected additional diseases is also quite high.

Since the dermatologist is usually the first point of contact for patients with psoriasis, they are particularly important for the detection of comorbidities. As a key figure, they should plan the entire therapy, which in the best case also includes clarifying possible side effects. But the patient himself should also know which diseases are associated with psoriasis.

Which diseases occur more frequently in connection with psoriasis?

Basically, the various concomitant diseases can be divided into three groups:

In metabolic diseases, the rate of diabetes is particularly increased. This is already the case with mild manifestations of the skin disease. There is also an increased risk of insulin resistance. With this, it is difficult to lower the blood sugar level. Irritable bowel diseases, such as Crohn’s disease, also occur 3.5 times more frequently in psoriatic patients than in those with healthy skin.

In addition, fat metabolism disorders, usually caused by obesity, are also increasingly occurring. This disrupts the transport of fat in the body, often resulting in an increase in blood lipid levels. This circumstance can then again trigger vascular and cardiovascular diseases.

In patients with psoriasis, blood pressure should also always be kept under control, because “complications such as a myocardial infarction occur statistically more than twice as frequently in psoriasis patients than in people of the same age without psoriasis,” Augustin continues. In pustular psoriasis, it can also be observed that the absorption of calcium is disturbed. Often patients suffer from thyroid problems in addition to the skin disease.

The risk of mental illness increases with psoriasis

Due to the visible skin changes, the self-confidence of many psoriasis patients also decreases and in contrast to this, the shame increases. What in many cases begins with a feeling of discomfort often increases with the severity of the skin disease. Especially in the face, on the head or hands – areas which can hardly be covered – psoriasis is a real problem for the affected person.

This leads to an increased risk of depression. Even when the skin is healing, many affected people feel depressed. Several studies have shown that psoriasis patients assess their own quality of life in terms of psychological stress as less than diabetics and people with cancer or arthritis. Wow. No wonder that psoriasis is in some cases also associated with depression. In addition, psoriasis can promote social withdrawal, which in turn has an impact on mental health.

By far the most common comorbidity: Psoriatic Arthritis (PsA)

The most frequently occurring concomitant disease has even established itself as a separate form of psoriasis. This dubious honor is given to arthritis. About one in five patients are affected not only by psoriasis but also by arthritis. Here, too, the severity of the external appearance of the skin disease does not indicate the risk of psoriatic arthritis. I have talked to some patients whose skin was completely normal of appearance. However, they still suffered from psoriatic arthritis.

In this form of the disease, the chronic inflammation also spreads to the joints. It mainly occurs on the hands, feet or spine. Pain is caused by inflammatory, painful swellings of individual joints or an entire finger, for example. So, if you experience morning stiffness, deep-seated back pain or swelling and pain in the joints, you should definitely have this clarified by an experienced physician.

What is important for me as a psoriasis patient?

We realize that psoriasis is much more than a skin disease. Healthy people who have never dealt with the topic before, but also those affected themselves, often underestimate the effects. And psoriasis has little to do with a purely cosmetic problem. Rather, it is a disease that can affect the entire life. Starting with plaques on the skin, the disease can affect the internal organs and even the psyche. Usually, you do not notice this immediately.

The impacts of these side effects can range from influencing the quality of life to threatening diseases that shorten lifespans. Since many comorbidities remain undetected, the dermatologist in particular is very important as the first point of contact for many affected persons. All the more I am therefore shocked by the reports of other psoriasis patients, some of whom have been looking for the right doctor for years. Long waiting periods, disappointments, lack of competence and time are unfortunately the order of the day for dermatologists. I, too, have found few doctors who are competent and also take time to work with their patients.

Last but not least: What can I do myself with all these additional diseases?

The most important thing is that each person affected by psoriasis builds up a broad knowledge of the disease and the whole environment. Only in this way can you meet your counterpart, be it a doctor or a nutritionist, at eye level. You should be well prepared for the visit to the doctor and be able to advise on possible secondary diseases. Do not just accept your fate and hope for better times. Life is much too long for that, even if it sometimes seems to go only in one direction: downwards. Around the world, about 150 million people are just like you.  We at Simply Psoriasis want to show you that psoriasis can also be “beautiful”. Therefore, we will soon start our interview series in which we will publish your story. If you feel like sharing your life with others and encouraging them, get in touch with us! We, and possibly 1,999,999 other affected people, are looking forward to it.

FAQs on diseases that accompany psoriasis

Common additional diseases of psoriasis include psoriatic arthritis, depression, type 2 diabetes, obesity, Crohn’s disease, insulin resistance or myocardial infarction. These need not occur, but there is an increased risk.

What can I do about these additional diseases?

Get specific information about your disease and the circumstances surrounding it. This is the only way to get to know your body and its signs better and to be able to talk to your doctor at eye level.

Does psoriasis always cause concomitant diseases?

No. However, the risk of certain diseases is increased. About 70 percent of those affected have a concomitant disease.

Is arthritis a common additional disease in psoriasis?

Arthritis is the most common concomitant disease of psoriasis. For this reason, it has also been included as a separate sub-form: psoriatic arthritis. In 75 percent of all those affected, the skin disease occurs first, in 15 percent, joint involvement and psoriasis occur simultaneously and in 10 percent, arthritis occurs first.