Psoriasis on the elbows and knees 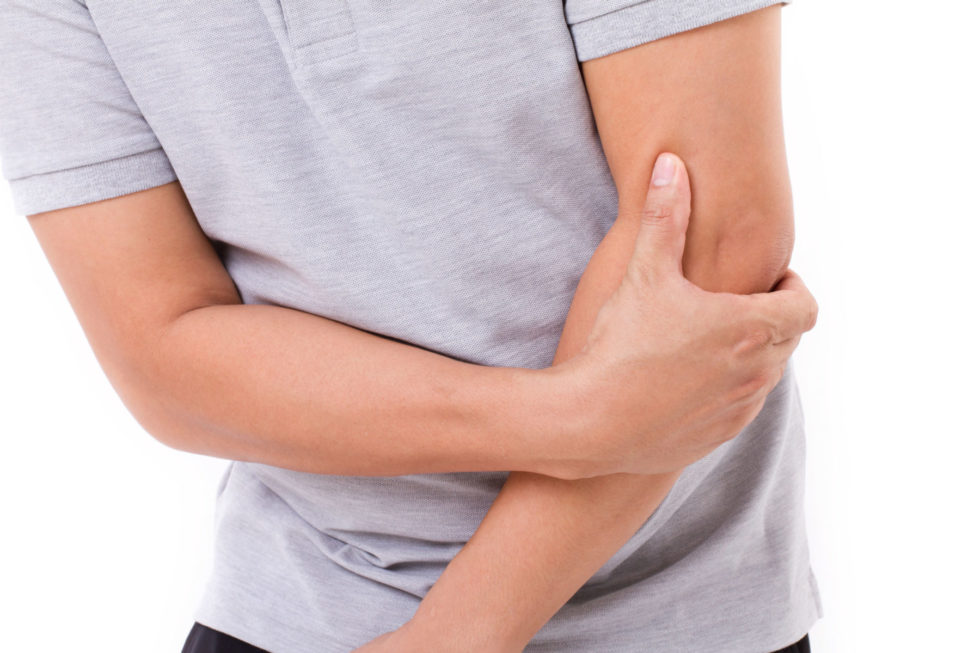 Psoriasis on the elbows is probably known to most people affected. Due to the special position of the elbows and knees, psoriasis at these places is particularly challenging for many affected people. The care is difficult and the affected body parts are difficult to cover.

Psoriasis is a chronic inflammatory skin disease. The causes have not yet been fully researched and the course of the disease also varies depending on the person affected. Psoriasis typically occurs on the elbows and knees, the back, the scalp and other parts of the body.

The causes of psoriasis are still not fully understood. Some studies show that a hereditary predisposition (genetic disposition) plays a major role in psoriasis. Other studies suggest that an external stimulus must be added to the genetic predisposition. A number of factors can certainly trigger the inflammatory skin disease.

The main factors include

Infections are considered a common cause of psoriasis. In particular, infections of the upper respiratory tract can trigger the skin disease. Special caution should be taken when infected with streptococci – this significantly increases the risk of developing psoriasis.

A high level of stress and psychological strain plays a major role in psoriasis. If there is permanent stress, this can trigger the skin disease. It does not matter whether it is physical or emotional stress. If the disease is present, stress usually worsens the symptoms.

Medication can also cause psoriasis. In particular, antihypertensive drugs such as beta-blockers, antidepressants and certain antibiotics are suspected of being a trigger factor. The exact reason is not yet clear but many people affected report that taking certain drugs was the trigger for their psoriasis.

Psoriasis is an autoimmune disease, so an unhealthy lifestyle is one of the risk factors that can trigger the disease. On the one hand, this weakens the immune system, on the other hand, it promotes reactions in the body that can cause the disease. Excessive consumption of alcohol, heavy smoking and being overweight can thus trigger psoriasis or aggravate existing symptoms.

Besides internal trigger factors, external stimuli can also trigger psoriasis. In some patients, psoriasis is caused by abrasions, cuts or chemical stimuli. This symptom is known as the “Köbner phenomenon”.

On which parts of the body does psoriasis occur?

Psoriasis is a very individual disease. Each affected person experiences the course of the disease and the symptoms differently. Nevertheless, certain parts of the body are typically affected.

Psoriasis of the elbow and knee is the classic manifestation of psoriasis. These areas are particularly prone to psoriasis. As the joints are constantly moving, those affected suffer particularly from the scales.

Many affected persons suffer from psoriasis of the scalp. This form of the disease is also known as “psoriasis capitis”. Typical are the sharply defined areas on the scalp, which are strongly supplied with blood and covered with white skin scales.

The back is also a place that is often affected by psoriasis. Often the skin only scales in certain areas on the back, but in some cases the psoriasis also spreads to the sides of the body and abdomen.

Psoriasis in and around the ear also affects many psoriasis patients. It typically occurs in the pinna and on the skin behind the ears. In particularly severe cases, it also attacks the ear canal.

Somewhat less common is psoriasis of the nails. Here the skin under and around the fingernails is affected. In some cases, the scaling spreads to the whole hand. There are conspicuous changes in the nail. It becomes soft and loses its protective function. This often makes nail psoriasis a painful affair.

All about psoriasis on the elbows and knees

Symptoms of psoriasis of the elbows and knees

The symptoms of psoriasis on the elbows and knees are similar to the symptoms on the rest of the body. However, due to the exposed parts of the body, they often appear more severe than in other areas.

Psoriasis on elbows and knees

Typical are sharply defined and reddened areas of skin. White scales form on them, which stand out from the skin.

The affected areas are often very itchy. The itching can become extreme, especially when the disease is in its early stages.

In general, the skin affected by psoriasis of the elbows and knees is reddened and irritated. It is sensitive to external irritation and touch.

In many cases, the irritated skin on the elbows and knees leads to inflammation. This leads to new scale formation and slower healing of the skin.

Attention: This article deals with psoriasis of the skin on the elbows and knees. It does not cover psoriatic arthritis. In psoriatic arthritis, the psoriasis spreads to the joints. Painful and swollen joints in the hands and feet are the result. This form of psoriasis affects about one in four people suffering from psoriasis.

Psoriasis on the elbows and knees – What you can do

Due to the unprotected position of elbows and knees, psoriasis in these parts of the body is often particularly difficult to treat. The joints are constantly in motion and the skin can hardly rest. It is therefore important to treat these areas in the best possible way.

For most people affected, it helps to provide the scaly skin on the joints with sufficient moisture. Natural care products such as chamomile creams and oils are particularly popular. Oils such as evening primrose oil, almond oil or black cumin oil not only provide the skin with the necessary moisture but also with nutrients. They are especially suitable to prepare the skin for treatment with other medications or as care after a full bath.

There is now a wide range of creams and ointments on the market that can help with psoriasis of the elbows and knees. Here it is worth trying out what works best. Some people find over-the-counter ointments wonderful, while others swear by using special products to treat their elbow and knee psoriasis.

In severe cases of psoriasis of the elbows and knees, you can also resort to medication. Special drugs specifically combat the formation of psoriasis and help many of those affected to achieve significant relief of the symptoms. Effective drugs include fumarates, methotrexate, ciclosporin and retinoids. Biologics are used in particularly severe cases.

Protect your elbows and knees

If you have psoriasis on your elbows and knees, you should treat these areas with special care. Try to avoid scratching the scaly skin no matter what. Take adequate care of your skin and protect the affected areas from external irritation. This requires some discipline, but your body will thank you for it.

Do not stress yourself and stand by it

Even if it is sometimes difficult, you should put yourself under as little stress as possible because of your psoriasis. Psoriasis on elbows and knees is often clearly visible. But the more you stand by your skin, the easier it will be for you to deal with it. And the more relaxed you are, the better your body will be able to deal with it.

Do you have psoriasis on your elbows and knees? How do you feel about it? Do you have any tips you can share with us? Leave us a comment. We look forward to hearing from you!

FAQ’s on psoriasis on the elbows and knees

On which parts of the body does psoriasis occur?

Psoriasis is a chronic inflammatory skin disease that can occur on different parts of the body. Elbows and knees, the back, scalp, ears, and fingernails are particularly frequently affected. Depending on the severity and course of the disease, these parts of the body may experience severe dandruff, itching and inflammation.

Does psoriasis occur more frequently on the elbows and knees?

What helps with psoriasis on the elbows and knees?

Elbows and knees are constantly moving and have little protection. Therefore, thorough treatment is necessary. In mild cases, creams, ointments and oils help to moisturize the skin. In severe cases, medication can be used to reduce the symptoms.