Psoriasis guttata – a special form of psoriasis in children 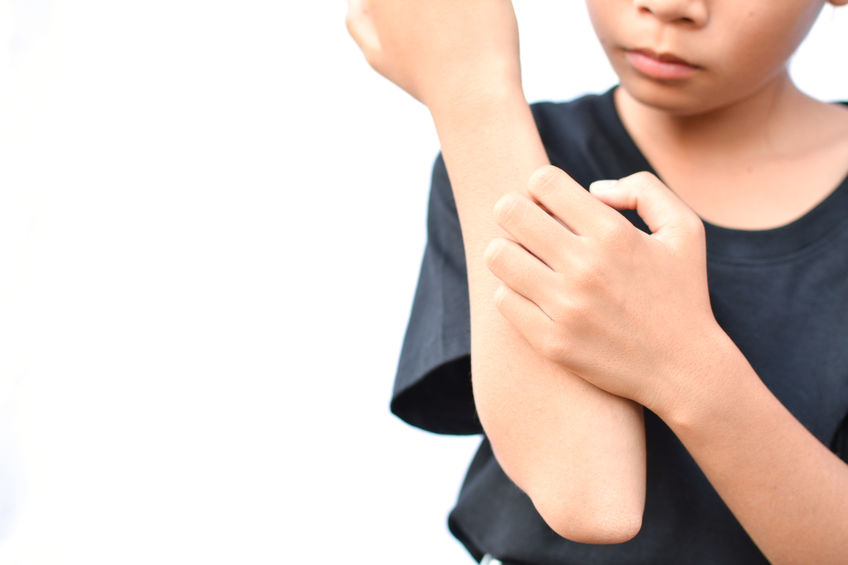 Suddenly, you notice that your child’s skin is covered with small, red, drop-shaped dots. Could these be symptoms of guttate psoriasis, a special form of psoriasis that typically occurs in children and adolescents?

What is psoriasis guttata?

Psoriasis guttata is a rather rare special form of psoriasis. It usually occurs suddenly, often in the course of an infectious disease and particularly affects children and young people between the ages of 5 and 15.

Around 30 percent of all psoriasis patients develop pathological skin changes for the first time before the age of 20.

Frequently, the first outbreak of psoriasis occurs in infancy. Between the second and the eighteenth year of life, the frequency of psoriasis diseases increases linearly according to medical experts.

In guttate psoriasis, the skin is covered with small, red, scaly dots that resemble water drops in shape. The individual dots range from the size of a pin to the size of a centime coin.

Psoriasis guttata most often occurs suddenly. In many cases, it occurs one to two weeks after bacterial infection of the upper airways or after an infection caused by streptococci.

The face, elbows and knees are usually not affected.

How does psoriasis guttata progress?

The course of guttate psoriasis is unpredictable. It can disappear completely within a few weeks, often directly after or alongside the healing of the present infection.

In other cases, it develops into chronic, “more typical” psoriasis, such as psoriasis vulgaris.

What are the triggers of guttate psoriasis?

In many cases, guttate psoriasis is triggered by bacterial infection. The cause is often an infection of the upper airways or a disease caused by streptococci, for example

Various drugs are considered possible triggers. These include:

What helps with psoriasis guttata?

Treatment of guttate psoriasis is usually the same as for psoriasis vulgaris. Doctors often primarily treat this special form of psoriasis in children locally, considering dithranol local therapy to be the treatment of choice.

Psoriasis guttata often occupies up to 40 percent of the body’s surface. The affected skin areas are treated with highly re-fattening substances, with the expectation of spontaneous regression.

After streptococcal infections, therapy with antibiotics is also advisable.

Guttate psoriasis: a case for the whole family

Psoriasis in childhood is more common than one might think. There is a lack of controlled, scientific studies evaluating the appropriate treatment of the disease. In most cases, however, local treatments achieve satisfactory results.

Guttate psoriasis often disappears just as suddenly as it came. In other cases, it is only a so-called initial manifestation and then remains in the form of a more “common” psoriasis, such as psoriasis vulgaris, for a lifetime.

The effects are often greatly underestimated. Those affected not only have to struggle with the external symptoms, but often also experience a deterioration in their quality of life. Particularly in cases involving affected children and their families, daily skincare routines are seen as time-consuming.

Does your child suffer from psoriasis guttata? What was the course of the disease? The exchange with other parents of affected children encourages and also offers tips and support.

Become a part of our Facebook group, we look forward to getting to know you!