Psoriasis and smoking: A good combination? 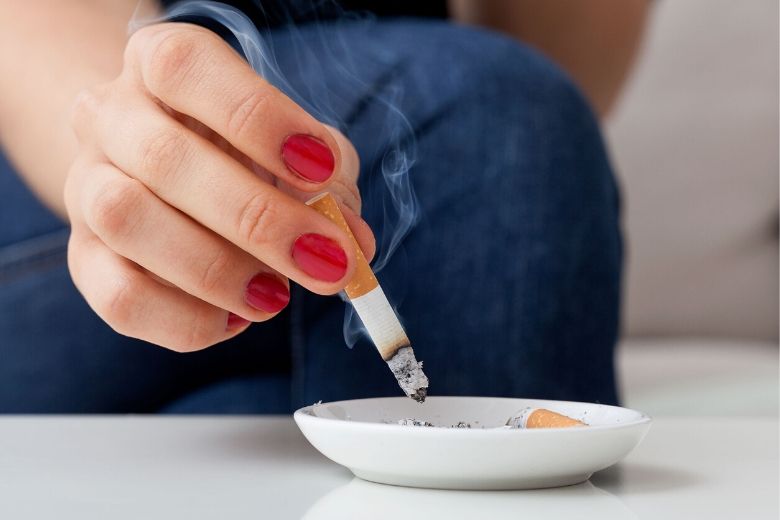 Everyone knows by now that smoking is not healthy. Cigarette consumption is associated with cancer, cardiovascular disease and skin aging. But did you also know that there is a connection between psoriasis and smoking? You will find all this and much more information about tobacco consumption in this article.

The history of smoking

The history of smoking dates back several thousand years. From the early days, shamans in America used smoking for their rituals. When the Europeans arrived in America in the 16th century, they brought the concept of smoking back to their homeland. For a long time, smoking was considered chic and modern. From the 1960s, however, the first concerns began to emerge. The health effects of smoking increasingly came into public interest. Today, smoking is considered one of the biggest causes of death.

What actually is smoking?

Smoking is the inhalation and exhalation of vapors. The vapors are produced by burning different plant substances. Mostly the term smoking is associated with tobacco. It is consumed by means of a cigarette, cigar or pipe.

Tobacco is extracted from the leaves of the tobacco plant. The tobacco plant belongs to the nightshade family. It is cultivated mainly in North and South America, Australia and the South Pacific. Tobacco contains up to 4800 ingredients. One of the best known is nicotine.

Nicotine – what is it?

Nicotine is one of the main ingredients of tobacco. It is a nerve poison and is produced in the roots of the tobacco plant. From there it migrates into the leaves of the plant and protects it from predators. Because of this effect, tobacco is also used as an insect repellent. Nicotine is the substance repeatedly mentioned in connection with smoking.

How does the body process nicotine?

What are the effects of smoking?

Smoking has a number of effects on the human body.

Nicotine has a stimulating effect

By smoking nicotine, the body releases adrenaline. This accelerates the heartbeat, increases the breathing rate and stimulates the body.

It creates feelings of happiness

If nicotine is consumed, this leads to a release of dopamine. Dopamine is a messenger substance of the body. It is responsible for the reward system. Therefore, smoking creates a feeling of happiness.

The stimulating effect of nicotine leads to improved performance. Fatigue is suppressed, appetite is inhibited and attention is increased.

In higher doses, nicotine has a calming effect. It dampens anxiety and reduces tension.

The more you smoke, the less these effects occur. Habituation sets in. To achieve the same effects, higher and higher doses must be consumed. Dependence arises.

Even though some of the effects of smoking are quite positive, smoking is harmful to health. There are various reasons for this.

Nicotine is highly addictive. As a result, smokers are at the mercy of the harmful effects of tobacco consumption. Quitting smoking is difficult and requires a lot of discipline. Withdrawal symptoms include craving for cigarettes, irritability, concentration problems, depressive moods, anxiety, nervousness and difficulty sleeping.

Smokers experience significantly faster aging of the skin than non-smokers. This is mainly because nicotine constricts the blood vessels of the skin. As a result, fewer nutrients and oxygen reach the skin cells. In addition, the skin of smokers stores very little fluid. The skin dries out faster, loses its elasticity and looks pale. Wrinkles appear faster and are more prominent.

Smoking is directly related to an increased risk of cardiovascular disease. Smoking damages the blood vessels and contributes to calcification of the vessels. Smoke reduces the level of oxygen in the blood. As a result, the organs are less well supplied with blood. Possible consequences of tobacco consumption are circulatory disorders of the arms and legs, heart attack and stroke. The risk of a heart attack is twice as high among smokers as among non-smokers.

A known side effect of smoking is lung cancer. Studies show that smokers are almost 30 times more likely to get lung cancer than non-smokers. People who started smoking early are particularly at risk. Heavy smokers also fall into the high-risk group. The smoke does not have to be consumed by the smoker themselves. Passive smoking also increases the risk of developing lung cancer.

The smoke from cigarettes worsens lung performance. Normally, the lungs can cleanse themselves. But cigarette smoke worsens this ability. This causes inflammation in the lungs more easily. Chronic bronchitis is particularly feared. It leads to increasingly poor lung function. As a consequence, there is an undersupply of oxygen and respiratory distress. In the worst case, this leads to an overload of the heart.

Tobacco consumption is directly related to cancer. About one-third of all cancers are due to cigarettes. In lung cancer, smoking is the cause in 90% of cases. The causes are toxins that are produced when tobacco is burned. About 250 of the 4800 active substances in tobacco are poisonous, 70 of which are carcinogenic. These active substances enter the body through cigarette consumption. There they attack the genetic material. Due to the high amount of toxins, the body is often unable to repair this damage. The cells multiply too quickly and cancer develops.

Psoriasis is a chronic autoimmune disease of the skin. The skin scales many times faster than in healthy people. Inflamed skin areas develop, which can be very itchy. Psoriasis mainly affects the hands, arms, legs and scalp.

But what is the connection between psoriasis and smoking? Cigarette consumption has been repeatedly associated with psoriasis.

Increased risk of psoriasis when smoking

Smoking is suspected not only to cause psoriasis but also to aggravate it. Studies show that smokers have twice the risk of developing psoriasis than non-smokers. Heavy smokers in particular are a high-risk group for getting psoriasis.

The cigarette smoke constricts the blood vessels in the body. This reduces the blood supply to inflamed areas of the body. Less oxygen is also transported through the body. These effects hinder the healing processes in the body. Wounds heal worse and more slowly. Another reason not to combine psoriasis and smoking.

Psoriasis and smoking puts double the strain on the skin

Psoriasis is generally stressful for the skin. It leads to inflamed areas and if the skin is scratched open when it is itchy, further damage is caused. Tobacco also has the effect of reducing the supply of nutrients to the skin. The skin is poorly supplied with blood and cannot repair damage sufficiently. For healthy and beautiful skin, psoriasis and smoking is therefore a particularly harmful combination.

Stress as a factor

People often reach for a cigarette due to stress. Stress is also one of the strongest triggers of psoriasis. Although this link is not necessarily causal, it can also play a role where psoriasis and smoking interact.

Therapy for psoriasis and smoking

For people who suffer from psoriasis, it is particularly harmful when psoriasis and smoking meet.

The body is also weakened by the toxic ingredients of cigarettes. Painkillers therefore work more slowly than in non-smokers. Furthermore, the ingredients of cigarettes can block the effect of drugs. This can lead to therapies not working as well as they do for non-smokers. The effects of drugs are attenuated and may not be fully effective.  Psoriasis sufferers should therefore consider stopping smoking.

Psoriasis and smoking: Not a good combination.

Smoking has many harmful effects on the body. Even though tobacco has been used as a stimulant in many cultures for thousands of years, the negative effects should not be neglected. Especially when psoriasis and smoking meet, there are negative consequences. Those who want to stay healthy should therefore keep their hands off tobacco products.

How does nicotine affect the body?

Consumed in small amounts, nicotine has a stimulating effect, promotes concentration and can calm the body. This is caused by the ingredients of tobacco. By inhaling the smoke, the active ingredients reach the brain in a few seconds, where they take effect. However, nicotine also has many negative effects and is generally regarded as harmful to health.

Yes, smoking is harmful. The consumption of cigarettes is associated with a variety of diseases. Besides cardiovascular diseases, smoking can also cause diabetes and cancer. New research also shows that there is a connection between psoriasis and smoking. The high addiction potential of nicotine makes it difficult to give up smoking.

Is there a link between psoriasis and smoking?

Yes, research shows that smokers are twice as likely to develop psoriasis as non-smokers. Cigarette consumption attacks the immune system and worsens the symptoms. Inflammation is increased and the skin heals more slowly. Existing therapies are also less effective for smokers.