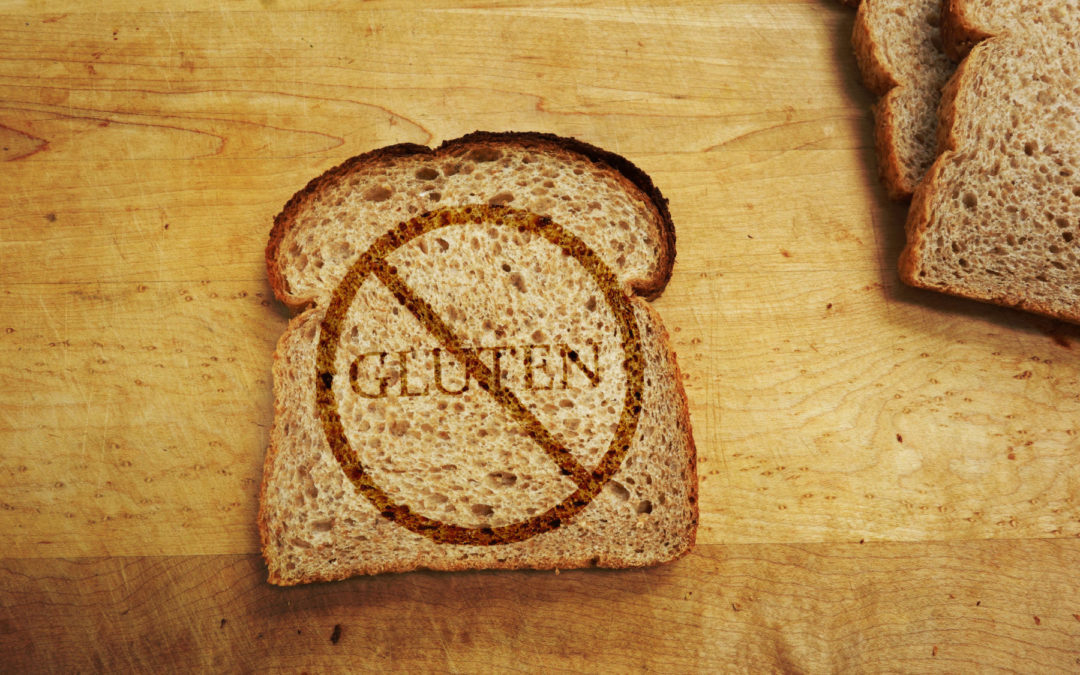 Recurring gastrointestinal complaints can have numerous causes. Gluten intolerance can be one of them, especially when symptoms such as an irritated intestine occur after eating cereals or foods containing gluten.

But what is behind gluten intolerance?

What causes the intolerance?

And what is the difference between irritable bowel syndrome, wheat allergy, celiac disease and gluten sensitivity?

We’ll tell you – and also look for an answer to the question of whether gluten intolerance is also a possible cause of psoriasis.

Gluten, also known as wheat gluten or cereal gluten, is a protein. It is not a single substance, but a composition of proteins.

It is found in seeds, i.e. in the shoots of cereals, and acts as a storage protein to ensure the growth of new plants. At the same time, gluten is a protective mechanism of the grain, which is difficult to digest. It specifically damages the digestion of natural predators and thus serves as a long-term defense.

This function of gluten as a defense substance is the basis of any gluten intolerance.

Natural gluten is a difficult-to-digest, stressful protein for our body. It inhibits various enzymes in our digestion and promotes inflammations and allergies in our bodies.

How does gluten intolerance develop?

The term gluten intolerance is not a medical term but serves as an umbrella term for the complaints, symptoms and clinical pictures associated with gluten.

According to medical experts, around 800,000 people throughout Germany are affected by celiac disease. The symptoms often appear in early childhood as soon as the first cereal-based supplementary food is eaten.

The specific symptoms of the celiac condition include

A biopsy (histology) can also provide clarity in the context of diagnosis. In a gastrointestinal endoscopy, the doctor takes a tissue sample and then examines it for inflammatory cells.

Nowadays, your doctor can make a relatively reliable diagnosis of celiac disease based on various blood tests or a biopsy. However, it is considerably more difficult with gluten sensitivity.

Gluten consists of a variety of substances that cannot all be detected by blood tests. In addition, the symptoms of gluten sensitivity are extremely varied, so that those affected cannot establish a direct link to food intolerance at first.

In addition to the characteristic digestive disorders, the symptoms of gluten sensitivity also include, for example:

The recognition of gluten sensitivity is additionally difficult for those affected, as the symptoms often occur with a time delay, sometimes only days after the consumption of the corresponding food.

The diagnosis of a wheat allergy is made by the doctor by detecting the corresponding IgE antibodies (immunoglobulin E) in the blood.

The symptoms of wheat allergy also vary. These include:

A wheat-free and gluten-free diet is the most obvious form of treatment.

Overall, the symptoms of gluten intolerance are very varied. The specific symptoms of celiac disease, gluten sensitivity or wheat allergies are differently pronounced in each person.

A doctor must confirm the degree of intolerance. The following symptoms can be possible signs of gluten intolerance:

Frequent and sometimes long-lasting inflammations in the intestine, which are triggered by gluten intolerance, put a strain on the entire immune system. The flow of information, blood circulation and the energy supply of our body are restricted. The consequences and symptoms show themselves in different ways.

If left untreated for a long time, persistent digestive problems can, for example, lead to Leaky Gut Syndrome. In addition, the increased need for detoxification is often also visible on our skin in the form of impurities, skin inflammations and eczema.

Gluten intolerance is not curable. However, if an affected person chooses a gluten-free diet, the associated symptoms often disappear almost completely.

However, a gluten-free and yet varied diet is quite possible. In the following, you will be given an initial overview of gluten-containing and gluten-free foods and cereals:

If you are diagnosed or suspected of being gluten intolerant, you should strictly and permanently avoid these grains and products containing these grains.

The following gluten-free cereals, on the other hand, can be integrated into your diet without any concerns:

Since 2005, product manufacturers have been legally obliged to label gluten-containing additives, such as wheat, as such in accordance with the allergen labeling obligation. However, gluten as a term need not be mentioned.

It is therefore particularly important for those affected to know which additives and ingredients contain gluten. You can recognize gluten-free foods by looking for the symbol of the crossed-out ear of wheat.

In their natural state, the following foods contain no gluten and can therefore be eaten without hesitation:

Apart from avoiding foods containing gluten, it is important to compensate for possible deficiencies in the body. The natural absorption of nutrients is partially disturbed by the inflamed intestine.

Essential vitamins and minerals, which are often poorly absorbed into the blood, are for example:

The targeted supply of vitamins and minerals can be in the form of food supplements or as an infusion.

Our diet has a major influence on our health and to a large extent on the health of our skin. It is therefore not surprising that gluten intolerance also influences various skin inflammations and skin diseases.

People affected by psoriasis, as well as some doctors, confirm that gluten intolerance, celiac disease or a wheat allergy can have an effect on psoriasis. Patients with psoriasis who follow a strictly gluten-free diet often experience significant relief from their symptoms.

However, this has not been medically and scientifically proven to date. A possible connection between diet and skin diseases such as psoriasis repeatedly leads to heated discussions. Theoretically, the effects would certainly be comprehensible – but researchers have mixed opinions.

However, anyone suffering from psoriasis should definitely consider going gluten-free for a while. A period of two to three months should already give clear signals as to whether this dietary change has a long-term positive effect on psoriasis.

A life with gluten intolerance? No problem these days!

Gluten intolerance – this diagnosis can cause despair at first. Fresh rolls from the bakery, pizza and pasta from your favorite Italian restaurant and the quick instant soup when there is no time for extensive cooking – all this seems to be impossible to find without gluten.

In fact, this diagnosis requires the individual to reconsider previous habits. This is because many foods contain gluten, either obviously or hidden. In order to escape the characteristic symptoms such as digestive problems, headaches, nausea and a weakened immune system in the future, it is essential to strictly avoid gluten and foods containing gluten.

As an affected person, it is important to inform yourself and make yourself aware of which foods are good for you and which ones should be avoided at all costs. However, we can say with a clear conscience that nowadays there is a very varied and thoroughly tasty range of gluten-free foods available.

Are you also affected by gluten intolerance? Or do you recognize some of the symptoms mentioned above and therefore suspect that you may be intolerant to gluten?

In our Facebook group, you can exchange information with other people affected by gluten intolerance at any time – we look forward to hearing from you!

Is a gluten intolerance curable?

Gluten intolerance is not a medical term, but rather a general term for the complaints, symptoms and clinical pictures associated with gluten. These mainly include celiac disease, gluten sensitivity and wheat allergies. Gluten intolerance is not curable. Those affected must deal with their intolerance, inform themselves and consciously pay attention to a diet that is as gluten-free as possible in order to greatly alleviate and reduce the symptoms.

What are the symptoms of gluten intolerance?

What should not be eaten if you are gluten intolerant?

If you have a gluten intolerance, patients and doctors recommend that you follow a strict gluten-free diet. Those affected often report an almost complete reduction in their symptoms. Whether obvious or hidden – the list of foods containing gluten is long. Grains containing gluten include wheat, rye, barley, spelt and oats.

Does gluten have an effect on psoriasis?

Recent research results show the great influence of diet on psoriasis. The negative influence of gluten on the skin disease is described again and again. Patients who eat a gluten-free diet often report a significant improvement in psoriasis

Reig-Otero Y., Mañes J., Manyes L. (2018): „Amylase-Trypsin Inhibitors in Wheat and Other Cereals as Potential Activators of the Effects of Nonceliac Gluten Sensitivity“, in: Journal of Medicinal Food. URL: https://www.ncbi.nlm.nih.gov/pubmed/29315017 accessed on 02.11.2019)